C.G. Godfrey has been involved in coastal proects for several years. Many projects have been on the North Norfolk Coast working alongside District and County Councils and Local Authorities.

Some of the projects we have been involved in are detailed below:

North Norfolk District Council awarded a contract to C.G. Godfrey Ltd to undertake the extension of the existing beach ramp on the beach at East Runton.

This work comprises the construction of a 400mm thick reinforced concrete paved area enclosed and supported by a steel sheet piled curtain wall, along with the realignment to the end of the existing surface water outfall via breaking out the end section and reforming at a different angle.

In September 2015 North Norfolk District Council awarded a contract to C.G. Godfrey Ltd to carry out the refurbishment of the existing Beach Access Ramp down on the beach at Mundesley, the work was to be carried out throughout September to December 2015.

The work comprised the removal of the remains of the timber ramp, cutting down of old sheet piling, and the construction of the new ramp in Greenheart timber with 9 No. pairs of 250 x 250mm x maximum 9m long piles driven up to 6m deep into the sand beach. 200mm x 250mm lateral beams (crossheads) were bolted to the heads of the pairs of piles, to which 200 x 250mm longitudinal beams were bolted, and on to which 225 x 100mm deck boards were bolted. 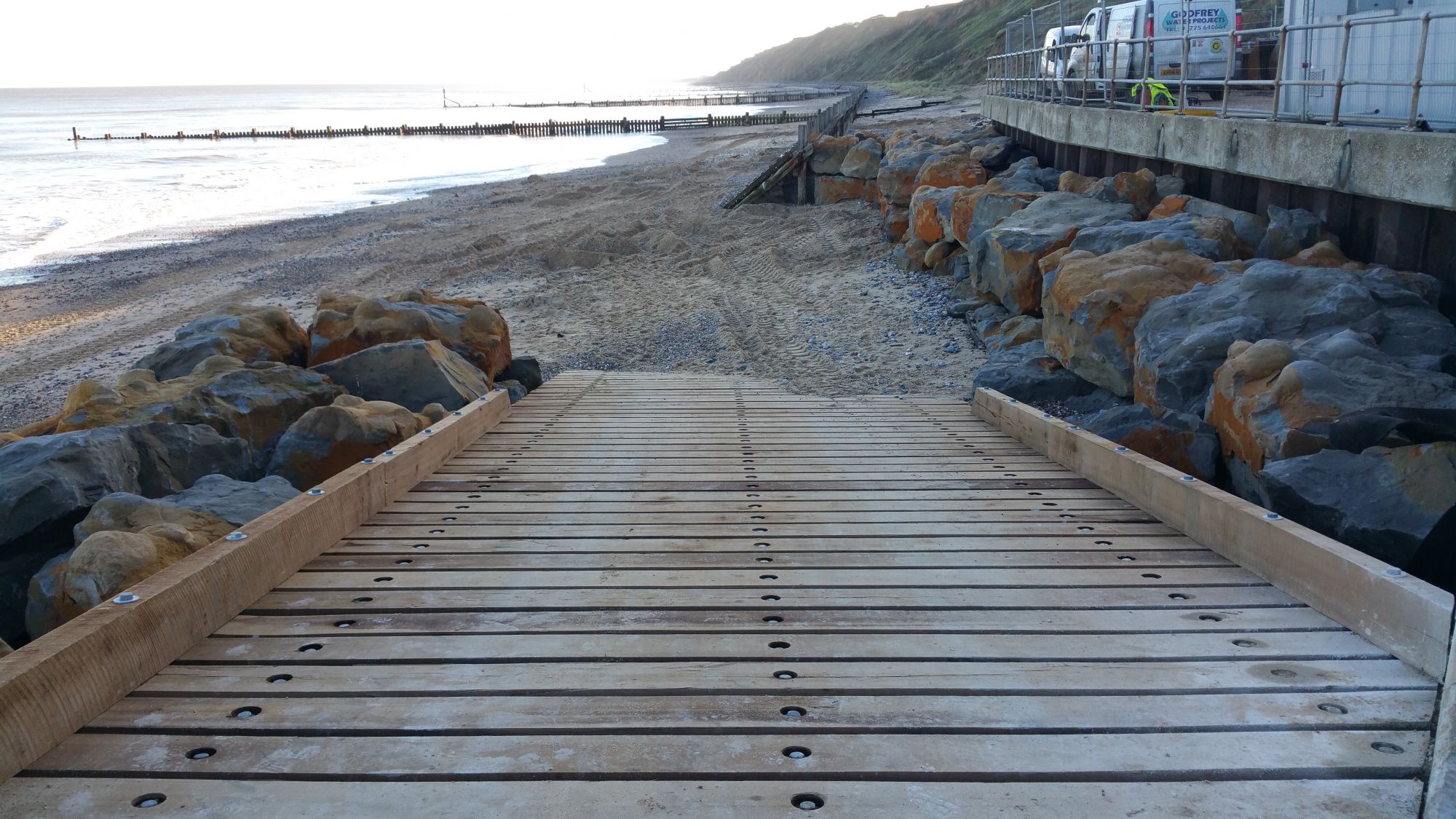 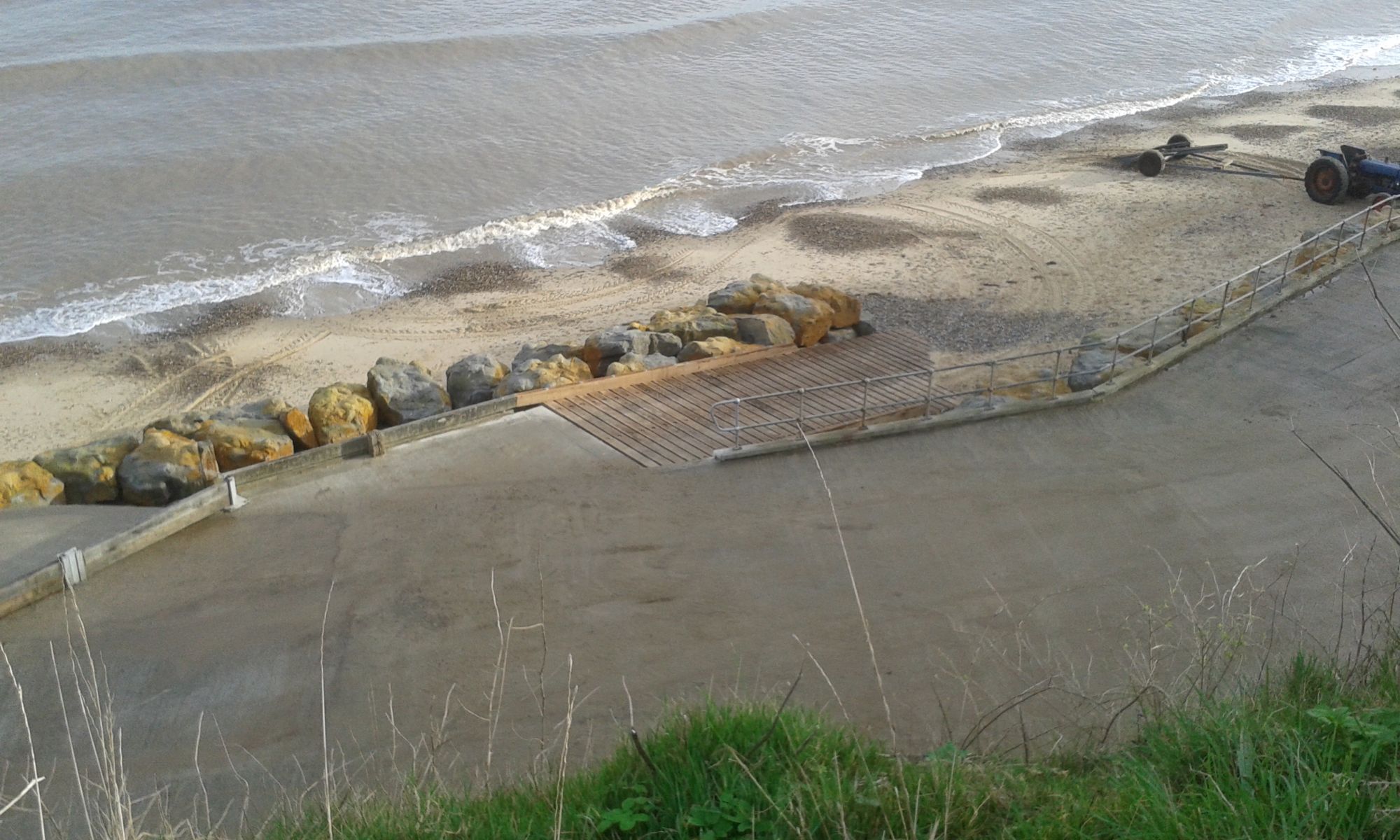 Again, despite the time of the year, and the inherent weather conditions, the works were carried out and completed successfully to the full satisfaction of both the Council and the local beach users, including fishermen and the Lifeboat crew.

The Contract was administered on behalf of the Council by Canham Consulting Ltd of Norwich.

Reconstruction of RC concrete access ramp used for the launching and recovery of a fleet of local crab fishing boats.

Scope of Works: Breaking out & re-construction of 200mm thick RC concrete ramp laid at a gradient of 1:3 Construction of timber winch house & the supply & installation of electric winch to assist in boat recovery. Work undertaken under tidal conditions on a site with restricted access.

During the storm events the toe of the cliff behind the small retaining wall is frequently ‘cut out’ or eroded by the storm waves cascading across the promenade resulting in the cliff becoming steep and failing. 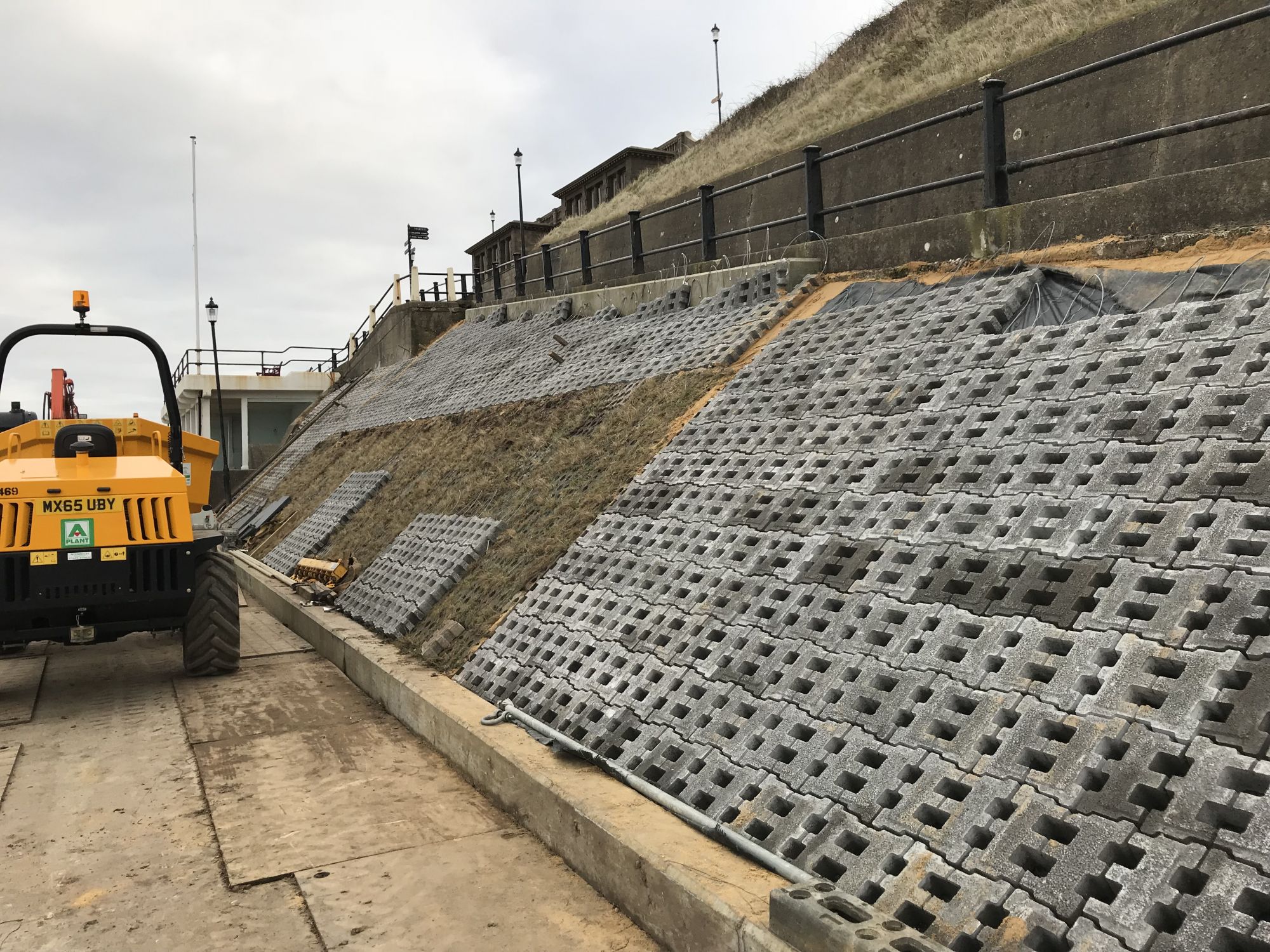 To protect the cliff toe from these erosive force’s large pieces of broken concrete, flints boulders and other stone debris were placed in the toe of the cliff and then covered with a layer of topsoil. The concrete and debris absorb the force of the waves thereby reducing the erosion of the cliff toe. However, over the years debris has become exposed irregular and the area generally very unsightly.

The cliff toe was graded out and a fair line and level along with any ‘spare’ debris was removed. Flexible pre-cast concrete Armourflex units 3 meters long were laid in panels fixed to the cliff toe slope to form a regular revetment to protect the toe of the cliff. The Armorflex units have hollow panels in which seeded topsoil containing a specially selected ‘coastal’ grass seed mixture is placed. The completed works will improve the visual amenity of the area as well as maintain the cliff toe protection function.